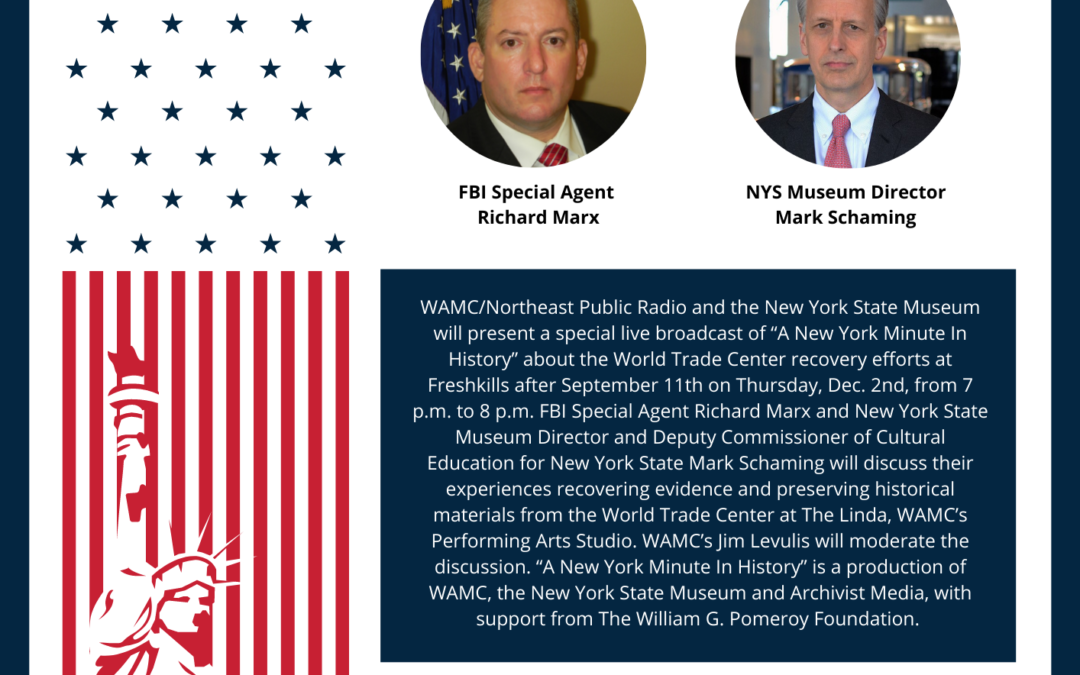 This event has been cancelled.

WAMC/Northeast Public Radio and the New York State Museum will present a special live broadcast of “A New York Minute In History” about the World Trade Center recovery efforts at the Fresh Kills Landfill after September 11, 2001 on Thursday, Dec. 2, from 7 p.m. to 8 p.m. FBI Special Agent Richard Marx and New York State Museum Director and Deputy Commissioner of Cultural Education for New York State Mark Schaming will discuss their experiences recovering evidence and preserving historical materials from the World Trade Center before a private audience at The Linda, WAMC’s Performing Arts Studio. WAMC’s Jim Levulis will moderate the discussion.

You can listen live on-air and at wamc.org. A video stream of the event will be available on the NYS Museum’s YouTube and Facebook pages.

On September 12, 2001, SA Marx arrived at Fresh Kills Landfill with the Philadelphia Field Office’s Evidence Response Team to assist in the recovery operations during the 9/11 attacks in New York City. SA Marx was designated as the FBI’s On-Scene Commander of the forensic recovery effort that sifted the 1.8 million tons of World Trade Center debris down to a quarter inch in size. SA Marx was in charge of the site from September 12, 2001 to August 9, 2002. The eleven-month operation recovered over 4,500 human remains, over 75,000 personal effects and processed over 1,300 vehicles from Ground Zero. For his efforts, SA Marx was a finalist for 2003 Director’s Award and the Federal Employee of 2003.

As Director of Exhibitions and Education at the NYS Museum at the time, Schaming worked to preserve historical materials from the Ground Zero site which became integral to the Museum’s permanent exhibit, The World Trade Center: Rescue, Recovery, Response, that opened in 2002.

“A New York Minute In History” is a production of WAMC, the New York State Museum and Archivist Media, with support from The William G. Pomeroy Foundation.