On this episode of A New York Minute In History, we explore slavery in New York and specifically the resistance to the institution, including the Underground Railroad. Co-hosts Devin Lander and Lauren Roberts speak with area experts and tour a historic home in Albany that is living a new life as a museum depicting the history of its previous occupants.

Thanks to Dr. Jennifer Thompson Burns, Dr. David Agum and Dr. Oscar Williams of the University at Albany’s Department of Africana Studies for their help with this episode.

Also thank you to Mary Liz and Paul Stewart of the the Underground Railroad History Project of the Capital Region for their expertise and time.

Music used in this episode of A New York Minute In History includes “Begrudge” by Darby, “Hash Out” by Sunday at Slims, “Kid Kodi” by Skittle, “Missing Transistor” by Ray Catcher and “The Air Escaping” by K4. 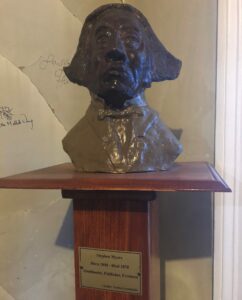 This week, New York Governor Andrew Cuomo for the first time publicly addressed sexual harassment accusations against him Wednesday, saying he did not intend to make anyone uncomfortable and that he is truly sorry. Many are calling for his resignation, including some fellow Democrats, but the governor says he’s not leaving.