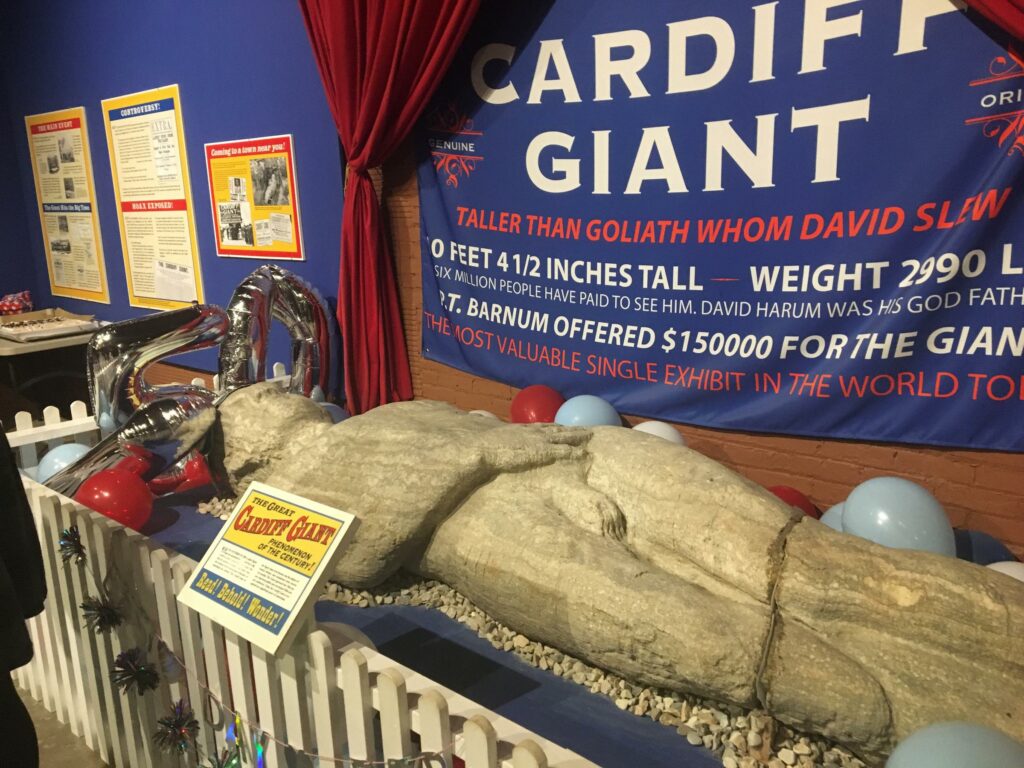 On this special episode of A New York Minute In History, we attend a birthday party for one of America’s greatest hoaxes. The Cardiff Giant, a 10-and-a-half foot so-called petrified man, was uncovered in 1869. And he is still marveled at by the public today.

Just inside the front door of the Farmers’ Museum in Cooperstown – can’t miss him – lies the man who mystified New Yorkers and newspaper readers far-and-wide 150 years ago.

The Cardiff Giant, uncovered at a farm in Cardiff, New York, south of Syracuse, became a sensation. And today it remains one of the greatest hoaxes in American history.

“He was in a reading passage on a state test. And I remember going home to my mom and telling her the story of the Cardiff Giant, and I was just fascinated. And I moved to Cooperstown about a year and a half ago and when I found out he was here, I’ve just been very excited ever since,” said Kilmer.

In the 1860s a businessman named George Hull came up with the idea to fool the public with his giant after getting into a discussion with a fundamentalist Christian. Michael Tamburrino, the manager of the performing arts program at the Farmers’ Museum, takes it from here…

“And he ended up thinking well, I think this guy would believe anything. So what if we create this elaborate sort-of event where we bury a stone giant in the ground, do you think people actually will believe that this was a biblical person?”

Hull went to great lengths to make his petrified giant as realistic as possible. The giant was cut from a solid block of gypsum shipped from Iowa to Chicago, where it was carved in secrecy. Acid was even used to alter the surface of the stone, to make it appear ancient. It was transported to Cardiff and buried at a farm owned by Hull’s co-conspirator William “Stub” Newell.

After it was “discovered” by well-diggers in 1869, it became a hit. A tourist magnet. Archeologists and onlookers alike flocked to the farm.

It cost 50 cents a head to see the giant. Even after the hoax was exposed, people kept showing up.

Tamburrino directed a performance at the giant’s birthday celebration to hearken the swindlers of the day – a medicine show, where hucksters try shilling an elixir supposedly bottled from a spring beneath the giant.

“Who will be the next to drink Cardiff’s Miracle Elixir and drink to lifelong health and happiness?”

Eventually, the giant was sold and exhibited in Syracuse.

The giant attracted the attention of showman PT Barnum, whose attempt purchase the giant was turned down. So he made and showed off his own Cardiff copy.

The quote often attributed to Barnum – “there’s a sucker born every minute” – may actually have been said by David Hannum, one of a group of investors who purchased a stake in the giant from Hull.

The stories of the giant continued long after it was unearthed.

David Angel says he is the great-grandson of one of the original tricksters.

“My grandfather told my father about his father, my great-grandfather, burying it. My dad was the youngest of the family born in 1902. So I grew up with all the stories of the Cardiff Giant throughout the family history,” said Angel.

Angel first saw the giant when he was 14, 55 years ago. He said he never doubted his father’s stories.

“I grew up with the stories. You had to have a memory to lie. And he didn’t lie. And he told it like it was. And it wasn’t only him, it was my uncles that told me the story, also,” said Angel.

On Wednesday, the giant was honored with decorations made by local preschoolers, his own super-sized party hat, and of course, a huge slice of cake.

A giant thanks to WAMC’s Lucas Willard for his work on the story.

Music used in this episode includes “Begrudge” by Darby and “Hash Out” by Sunday at Slims.

On this week’s Media Project, Alan, Rex, Rosemary and Barbara talk about partisan media growing in the U.S.; the rise of more women into leadership positions in journalism; what journalists can do in the age of misinformation, and more.