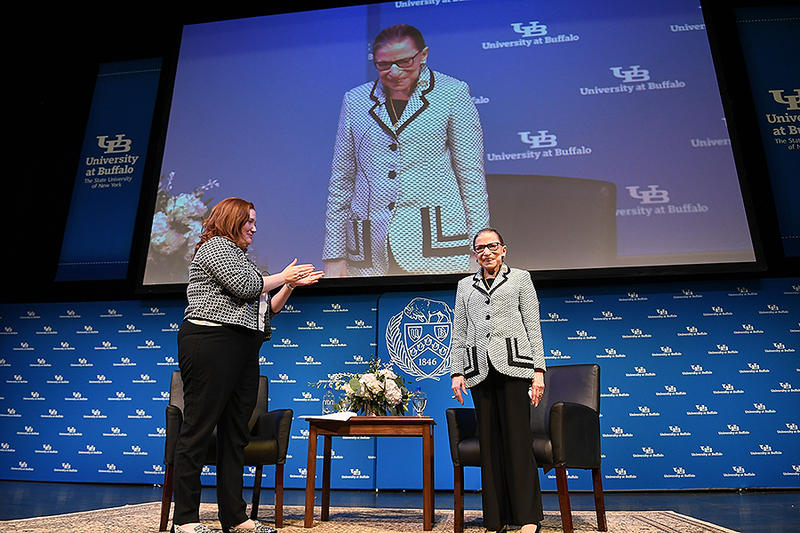 On this week’s 51%, we revisit an interview with Ruth Bader Ginsburg from 2019. The Supreme Court Justice’s death on September 18 sparked vigils across the country, and controversy over the timing of the next appointee.

We’ve gone to the archives for an interview with Supreme Court Justice Ruth Bader Ginsburg, the second women who served on the high court and who fought for gender equality throughout. The interview from late August in 2019 aired on 51% in September 2019. Ginsburg died from complications of pancreatic cancer at the age of 87. Her interview last year at the University at Buffalo School of Law came the day after the Supreme Court confirmed she’d recently undergone radiation treatment for a pancreatic tumor. Ginsburg was at the school to receive an honorary degree.

Law School Dean Aviva Abramovsky interviewed Ginsburg at the time, and the interview is courtesy of WBFO Radio. Ginsburg talks about her decision to enter law school, cases such as the US v. Virginia (which allowed women into Virginia Military Institute), and women’s suffrage, the 100th anniversary of which we’ve been commemorating this year.

That was Supreme Court Justice Ruth Bader Ginsburg speaking with University at Buffalo School of Law Dean Aviva Abramovsky. The interview is courtesy of WBFO Radio. Ginsburg died September 18 at the age of 87.

That’s our show for this week. Thanks to Tina Renick for production assistance. Our executive producer is Dr. Alan Chartock. Our theme music is Glow in the Dark by Kevin Bartlett. This show is a national production of Northeast Public Radio. If you’d like to hear this show again, sign up for our podcast, or visit the 51% archives on our web site at wamc.org. And follow us on Twitter @51PercentRadio This week’s show is #1628.