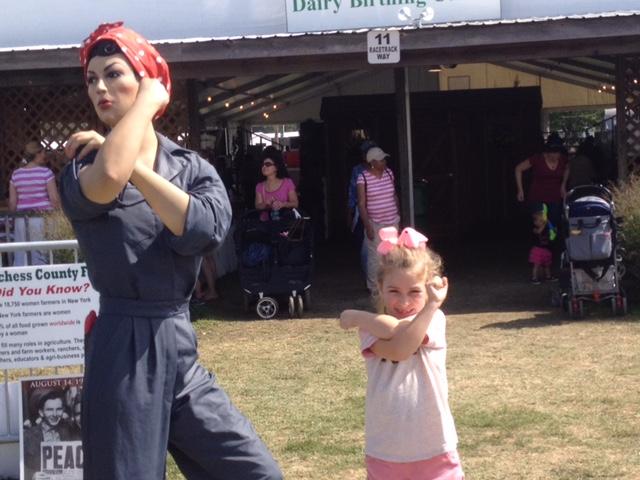 On this week’s 51%, we jump into the battle over the Equal Rights Amendment and, with Veterans Day approaching, we have a story about a cultural icon from World War II. Plus, we meet an artist who experiences synesthesia.

Illinois was a battleground for the fight over the Equal Rights Amendment decades ago. As Rachel Otwell reports, it’s once again earning that status.

The song leading into this piece was a live performance of Ani DiFranco singing “Amendment” in 2010 at the Rhinebeck, New York-based Omega Institute’s annual Women & Power retreat, a retreat that has been featured on 51%.

MAPLE SHADE, N.J. (AP) — A New Jersey-based magazine owned by women has canceled a women’s empowerment panel following criticism because the participants were all men. SJ Magazine had titled the panel that was set to include four men as “Women in Business: A man’s point of view.” The magazine says it believes it is “helpful when everyone is part of the conversation on women’s empowerment and feminism.” But the magazine says it was never its intention to offend anyone with the November 6 event.

Criticism against the panel was harsh on social media. The magazine explained that  three other panels were composed of all women and said it wanted to start a discussion with men.

One of the participants, New Jersey Democratic Assemblyman Lou Greenwald, had decided to withdraw because of the panel’s composition. He said he would offer his seat to someone who can “bring a more diverse and inclusive point of view to this critical issue.”

Another participant, Rowan University President Ali Houshmand said he was delighted to be invited to be part of the panel because he has “very strong feelings about promoting leadership opportunities for women.” However, Houshmand said he understood why some people were concerned about an all-male panel. Another all-female panel titled “Success Stories: Taking charge without wearing a suit and tie,” is set for December 4.

As summer was drawing to a close, a county fair in the Hudson Valley region of New York, for the first time, featured two sculptures. One in particular, focuses on women — Rosie the Riveter. And here’s the man who accompanies and promotes the works of art and tries to get the word out about a time in history and, its relevance today – Cole Kleitsch.

Now we meet a Minneapolis artist who experiences synesthesia and uses an iPhone and fabrics to create symbolic dreams and layered shapes with meaning. KFAI’s Dixie Treichel visited her studio to find out more.

That was artist Candy Kuehn explaining to KFAI’s Dixie Treichel how she sees out of time. Thanks to Patrick Garrett for production assistance. Our executive producer is Dr. Alan Chartock. Our theme music is Glow in the Dark by Kevin Bartlett. This show is a national production of Northeast Public Radio. If you’d like to hear this show again, sign up for our podcast, or visit the 51% archives on our web site at wamc.org. And follow us on Twitter @51PercentRadio

“Contributions to 51% #1476 come from the Associated Press. All Rights Reserved.”