The Media Project is an inside look at media coverage of current events with WAMC’s CEO Alan Chartock, Times Union Editor Rex Smith, Judy Patrick, Former Editor of the Daily Gazette and Vice President for Editorial Development for the New York Press Association and Barbara Lombardo, Journalism Professor at the University at Albany and former Executive Editor of The Saratogian and The (Troy) Record. On this week’s Media Project Alan, Judy, Rex, and Barbara talk about the 2019 Pulitzer Prizes, whether advertisers or underwriters have ever pressured media, a listener letter about NPR and Noom, and more. 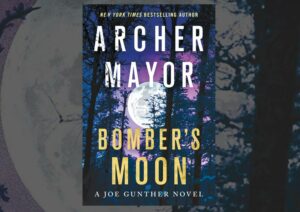 Archer Mayor is the author of the critically-acclaimed series of police novels feature Lt. Joe Gunther of the Brattleboro, Vermont, police department.  In Mayor’s latest Joe Gunther novel “Bomber’s Moon,” the murder of a small-time drug dealer snowballs into the most complex case ever faced by Joe Gunther and his Vermont Bureau of Investigation team.